3:40am: Landed & aircraft at Gate
Flight delayed taking off due to arrival delay from Bahrain.

3:55am: Exit Aircraft.
Quick visit to the Restrooms. To be greeted by that unique & typically Indian ‘fragrance’. Then on to join the Immigration Check lines. Serpentine lines. Seven aircraft from the Gulf land at around the same time.

4:19am: Immigration Check done. With the experience of the person behind me eager to move ahead and closing up the gap between him & me such that I could feel his breath down my neck! Personal space is something which has no meaning in India.

4:20am: Join yet another line. This time for customs security check. I wonder if the Customs check would be better served after the passengers collect their bags from Baggage claim. As it turns out Customs check was just another stop in the whole ‘international arrival process’ dance. Customary passage of the carry-on through X-Ray and you then you get shunted down to the Baggage Claim carousels. Chaos Central starts here. After three scans of the collected baggage, I had to literally jump over – fairly Batman-esque, I have to say – lines of baggage to get to my roller duffel sitting under a carton. Then the fight to get out of the chaos. Workout of muscle as well as of patience!

4:45: Another customs check. This time just to hand over the Customs Tab from the Immigration form. And you’re free and clear of the Arrivals Ritual.

5:40am: Arrived at the hotel. Taxi driver knew how to get to the general Fort Kochi area. But not the hotel location. As the cliche’ goes, “There’s an app for that” And, indeed, there is and I have. Sygic GPS doesn’t need wifi, but works off the phone GPS. As the app fed me directions via my earphones, I repeated to the driver, as if I was a regular visitor here! The app brought me right up to the doorstep.

And then what I had feared happened. India, being India – and this hotel being an old home converted into a hotel – they were obviously not expecting me. There was no light left on for me. Nor did numerous ‘ring the bell’ wake anyone up inside. Patience caved in at 6:10am. I sent a text to Priti in USA to call the hotel and have them let me in! After a couple of tries, she got through and a few sharp words caused the doors to ‘Open Sesame’ ! “Some works were going on Sir, why only I don’t hear the bell”

All in all, an eventful first few hours in India. Setting up perfectly for the rest of the days. Perfectly. 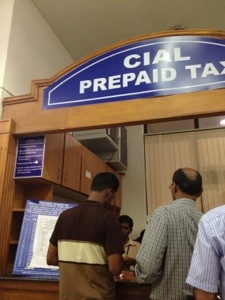