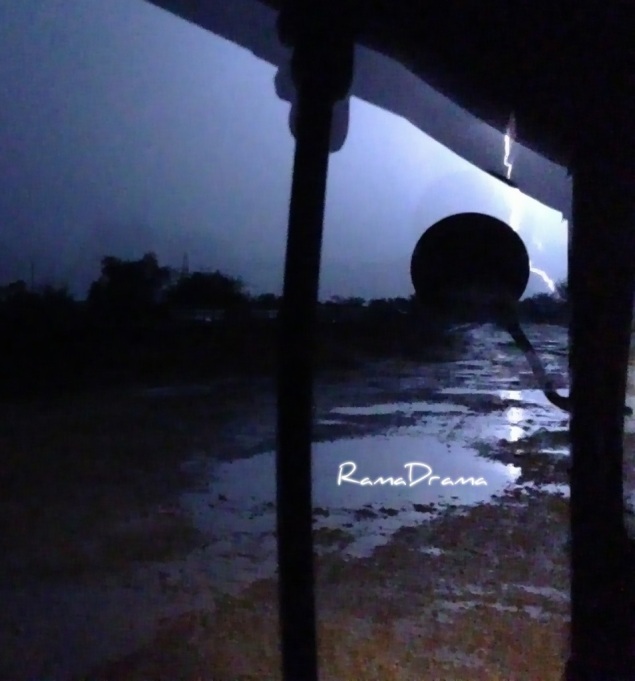 They say you can never win the grand prize in Jeopardy without going through the “Lightning” round. We didn’t expect the rickshaw gods to take that literally!

Let’s start from the beginning. After the NH34 episode, everyone in the hotel promised us that the roads will be great from Siliguri to Guwahati. Obviously we forgot to ask “great” compared to what. Within minutes on the road we found out what their standards were. Most likely the roads were great compared to “Underwater upside down hand walking inside an ocean”.

By now, the Rickshaw sailing has become an art with most runners who dared to conquer NH34. Rickshaw sailing is a skillful tender dance that you do by maneuvering over a series of potholes, inches apart, as you row your adrenalin-powered vehicle one hole at a time, shifting between second and third gear and occasionally move it up to one when it stalls. We hit upon one such stretch right after Jalpaiguri where the wonderful Bengal government under “Didi” has decided to lay brand new spanking roads. Only problem is that in order to do that, they ripped the entire old roads for a long stretch that seemed like 10kms to us.

Sathupally was a teaser. NH34 was the first half of movie. Jalpaiguri Sailor paradise section was the true “Interval”. Our plans of Guwahati went up in dust cloud as we rowed our rickshaw for about hour and half inch by inch. As usual, all inquiries about how far does these sailor waves go was promptly replied by the road workers as,” Just around the corner” and we realized they forgot to mention that the corner was around 9kms from that spot.

As we got off the sailor surface, we made some good progress, even going up to 60kms in some stretches until we saw large groups of people going in Vans and Rickshaws. Smarter, less tired minds would have guessed these large number of people on a weekday must be going somewhere important but we were too “active” to think anything. Turns out one of the biggest festival in the region was taking place right smack in the middle of NH34C, the route we were on. It was their celebration of harvest,”Basanti”. We wasted another hour there as the crowds ignored our honks like Americans ignore the expired milk carton in their refrigerator.

As we got out of the crowd, we saw the smooth, tar filled, silken expressway that everyone has been promising sincere morning. Any movie without a befitting climax is just a documentary. Our Rickshawrun movie got its climax as the Road General took over the wheels in the expressway to save lost time only to find out, the elusive expressway is just 2kms long. After that you get a stretch of decent 400 meters road and then mud road. Another 400mts and more mud road. The roads began to get darker as lightning and thunderstorms started making climatic background music. As we were hoping we reach the next town before it rains, the rains started pouring down. So, there we were, two road warriors on a desolate, mud road with rains, thunderstorms and lightning sputtered across for miles. All I could think was, “And we thought yesterday was bad!”.

For the next 100kms, fellow Chunga started following a truck that lighted our way as we reached Bongaigaon amidst some serious lightning photography from back seat. Once we get some decent connection, we will share them.

It has been 12 days nonstop driving and we have another 280kms to go. You might think these guys are ready to get off the road and go back to AC rooms but truth be told, I am sad it is coming to an end tomorrow assuming the roads from now on will be good and we reach Shillong tomorrow evening.

Let’s just say for tonight, end of Day 12, has been more memorable than we ever expected it to be and quite happy to be staying in a clean place with white hospital bed.